Rock climbing articles, gear reviews and videos. Because climbing is awesome. It just is.

It is estimated that between 1000 to 1500 are trying climbing for the first time EVERY day. And this is ONLY in the U.S. Think about it. Every day. That’s alot.

True or not, but it seems that rock climbing is BOOMING! Olympic sport and all. Hundreds of new climbing gyms are opened across the world every year. Climbing used to be a niche sport practised by the thousands but nowadays an estimated 25 million people are climbing regularly.

Most (if not all) climbers nowadays start by climbing indoors. The rapid growth of climbing as a sport is partially explained by the increasing numbers of indoor climbing gyms. Easy access to the gyms and the fact that climbing doesn’t cost much is a definite advantage.

Climbing outdoors is not the same as climbing in a gym. In fact, it sometimes seems like an entirely different sport. There are a few things to take into consideration when transferring from the gym to the crag. The goal is to make climbing at the crag an enjoyable experience for you and other people as well.
//pagead2.googlesyndication.com/pagead/js/adsbygoogle.js

The fact is that climbing IS dangerous. Unexpected things can happen at the blink of an eye. I’m not trying to scare you. Just stating the facts here. By acknowledging these things, you’re allready on the safer side.

But if things go bad, they can go really bad. Rock climbing can be fairly safe but it’s only as safe as you make it. Likely bad things won’t happen, but it’s good to be prepared if things turn sour.

Some things (among others) to take in consideration: 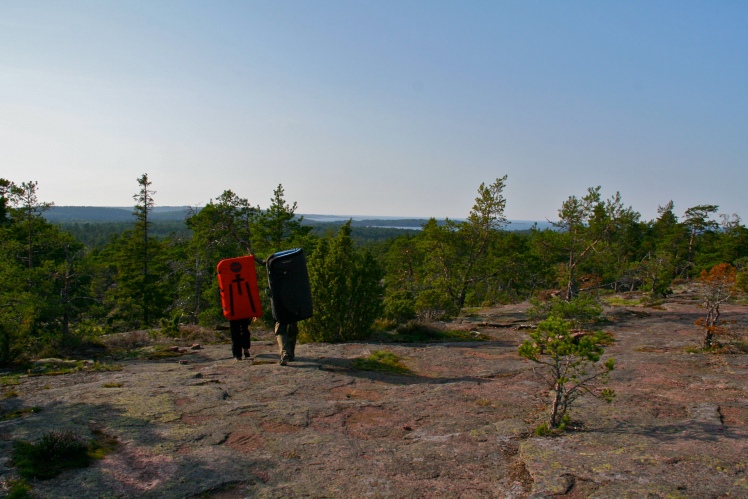 One, if not the best way, to get into rock climbing outdoors, is to find a local guide. Preferably someone who has several years of experience climbing outdoors. They can show an teach you things that would be hard to learn from books alone. Some of these things might be: placing the pads or where to belay from, what are the starting holds of boulder problems, where a certain sport route is, how a route or move should be done and so on. A good guide is priceless when starting out.

A local guide knows all the best spots for starting climbers. These spots have several different problems in several different grades. This way you’ll easily find the level that you are operating in. I’ll talk about this a bit later in the article.

So what if you don’t have a more experienced friend to take you climbing outdoors? Maybe there is an active group of rock climbers at your local gym whom to tag along with. Or maybe a local climbing forum on the internet. Social media groups are always a good way to find new friends. Ask around, I’m sure you’ll find someone to help you out. Climbers are nice people and are almost always willing to help.

The holds are not in bright colours

Climbing at the gym is a whole lot different from climbing outdoors. At the gym, the holds are marked with bright colours and you can probably read the whole route from the ground. All the footholds are also bright in colour and all that is left for the climber, is to execute the moves.

At the crag things are different. All the holds are not visible from the ground. Especially if the crag is not seeing lots of traffic and the holds don’t have any chalk on them. Sometimes you just have to feel your way up the route. If you find the footholds.

The footholds might stay hidden even when searching for them. Like I said, sometimes it feels like climbing outdoors is an entirely different sport. For example a foothold can be only a ”texture” on the otherwise smooth piece of rock.

Most routes or problems have several different beta options by using different footholds and intermediate holds. When climbing inside, the routesetter has pretty much decided how the route or problem should be climbed.

At first this all can seem intimidating and hard, but once you get used to this new way of looking at things, it’s one of the best aspects of climbing. It’s part of the process that leads to sending a route or boulder problem.

For me one of the most rewarding feelings in climbing is to unlock the easiest way to climb a route or boulder problem. Especially after multiple tries or even sessions on the same problem. The moment when you realize how to climb a certain move or section. The moment you realize that you can do the route. And then eventually sending the route. It’s a pretty damn good feeling!

Climbing outside differs a lot from climbing in a gym. Taking falls outside also differs from falling indoors. In a boulderng gym the floor is covered with even and thick padding where you can climb high off the ground and still be confident and fall almost any way possible yet still being safe (slightly exaggerating here but you get the point).
//pagead2.googlesyndication.com/pagead/js/adsbygoogle.js

Bouldering outside things get a bit more complicated. The landings are seldom perfectly flat. Most likely there is an old tree stump or a un-movable rock underneath the climb you want to attempt. Laying the pads right, so that the landing is as even as possible and so that there are no dead spaces or edges on the landing area is crucial. One or a few spotters can also boost confidence AND keep you safe in case of a sudden fall. What is spotting? Read all about it here .

When sport climbing there are several different things to consider. In the gym, there are only safe places to fall. The walls and routes are constructed with this in mind (as long as you get up to the second bolt and clip it successfully).

And again, sport climbing outside is a bit more dangerous. For example, climbing over a ledge means that you can potentially hit it if falling above it in a bad spot. Your belayer needs to be sharp and focused during the entire climb.

Loose rock is also common. Holds can break and rock can fly through the air. Wearing a helmet is always a good idea for both the climber and the belayer.

I remember once falling unexpectedly just below the third bolt on route I had done several times. There was some slack in the rope and the belayer was slightly lighter than I was. My fall pulled the belayer off the ground and we meet halfway with my foot accidentally stomping his forehead really hard. The climbing day would have quickly been over, had he not have weared a helmet. The funny thing was that it was the first time he ever wore a helmet belaying.

So, wether rope climbing or bouldering, practice falling before being high off the deck, squeezing on to dear life with white knuckles, afraid to peel off. Falling is alot less scary with a few practise runs.

When bouldering, climb up a few feet a take practice jumps on the pads to get a feel for it. Talk with your climbing partner on how you want to be spotted and where you will most likely fall. Planning ahead is key.

When sport climbing, climb over the third or fourth bolt, or where it’s safe to fall without hitting anything underneath and take a few practice falls. You’l probalbly notice how falling outside is a lot more exciting than taking whippers inside. That’s fine. It’s all part of the outdoor experience.

If you can climb 5.12 at your local gym, it doesn’t automatically mean that you can climb any 5.12 outside on real rock. Climbing outside is quite different from climbing indoors. Indoor climbing tends to be more about power and big moves. Why? Because they seem to be the most fun to climb.

Outdoors on real rock the climbing can be very technical and position orientated. And a lot of bad holds. On a technical style route you can have all the power in the world and still not be able to climb the route. It is not uncommon to be a solid 5.12 gym climber and be struggling outside on a 5.10.

When you go to the crag for the first time, start with easy routes. Much easier than you would think. If you usually climb 5.10 indoors, try to find a 5.8 or easier. Get familiar with the style of climbing before jumping on the harder stuff.

I recommend finding a route well within your skill level and doing a few laps on it just to get comfortable. After a few laps (and practise falls) you can go try how the harder stuff feels.

Same thing with bouldering. Start slow and easy, get yourself a feel for what climbing on real rock feels like and only then go try the harder problems.

Be respectful of other people

This is one of the most important things to keep in mind when transferring from the gym to the crag. Be courteous of other people.

First of all, many crags are located on privately owned land. The worst thing you could do is disrespect the landowners wishes. Keep your voices down, pick up trash, keep on the trails and so on. If the landowners get fed up with climbers they can ban climbing on their property from everyone. (Too) Many crags have been closed from climbing due ignorance and disrespect.

If there really are 25 million people regularly climbing, the odds are that crags might get a little crowded sometimes. Being nice goes a long way.

In my eyes, one of the most visible acts of being courteous to other people, climbers and other people enjoying the outdoors, is brushing the holds after finished with climbing. Lets be honest here, chalk on rock isn’t a pretty sight. Especially to regular people who don’t know what chalk is and why it’s used in climbing.

Brushing the holds clean of excess chalk after the climb is really important. And don’t forget brushing the tick marks too.

Tick marks are commonly used to locate an important hold on the climb or a certain spot on the hold. There is no need to mark all the holds. It only makes you look like a total amateur and a dumb ass. Tickmarks are small ticks or dots on the rock, not two feet long massive lines (and I’m sorry to say that I’ve seen those too). How do you think the landowner (and other people) feels when coming across such ”graffiti” when walking around on his or her lands? Cool drawings or a ugly mess?

Etiquette at the crag

Here is a really informative pdf on etiquette at the crag by the Access Fund. EVERY climber should know these, so we can keep climbing outdoors with the rapidly growing community of climbers.

The Pact (explanations in the link):

How to spot in bouldering: Top 7 tips

How to start rock climbing [Guide]

This site uses Akismet to reduce spam. Learn how your comment data is processed.